From Water Spouts to Starfish...

Hello Friends, what a day we had yesterday! While my son & I were window shopping in George Town, Grand Cayman, my son spots this!  It is a water spout right off of the harbor.  A water spout is similar to a tornado over the ocean and they are usually not this big!  It was all over the Cayman
news last night.  There were a couple of big storms at sea and the atmosphere was just right for this to happen. 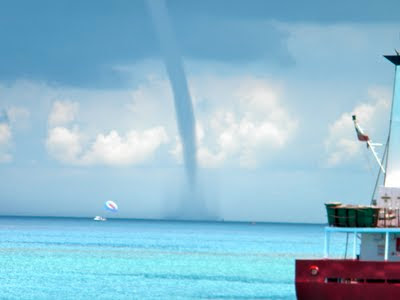 It got bigger, then smaller.  It is full of wind also and very dangerous to be near it!  The water is coming from the clouds, not the ocean. 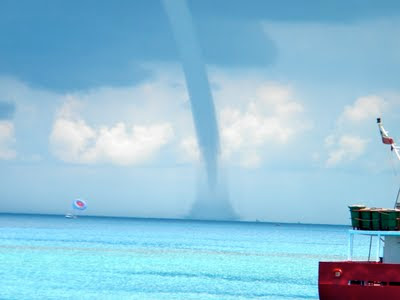 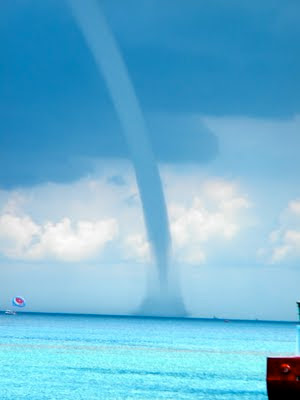 Could you imagine if you were that person in the parachute...This was not that far off from land or the parachute person! 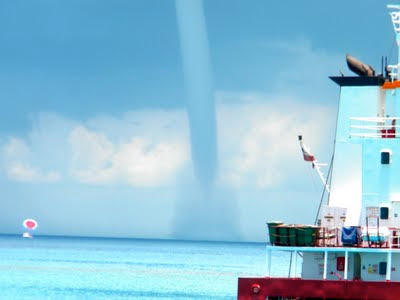 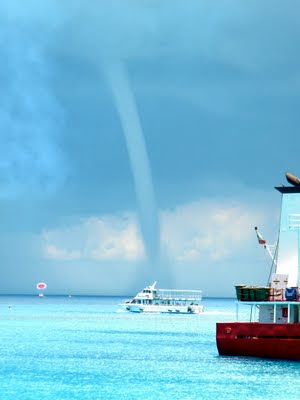 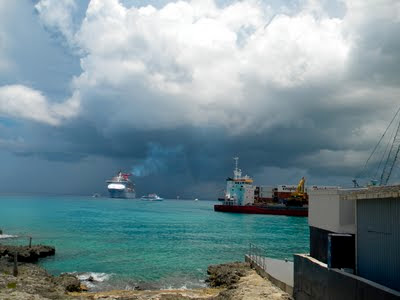 Then it ended, just like that...the cruise ship went right by it!  YIKES!!! 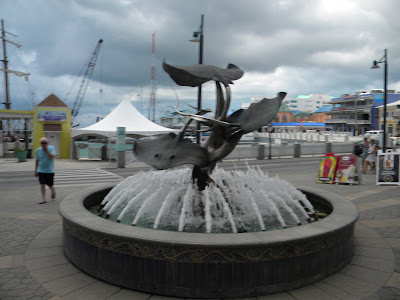 So back to walking around and we decided to head to the Cayman Island Turtle farm.  It was fun and a lot of turtles... 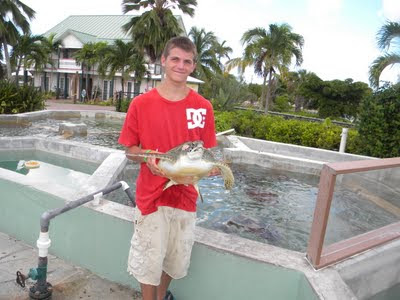 Back at the condo and off the dock, we saw these beautiful sea animals right off the dock!  Who needs to go diving when you can see this and take pictures too! 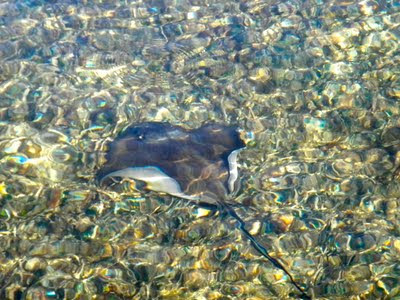 This is a ray. 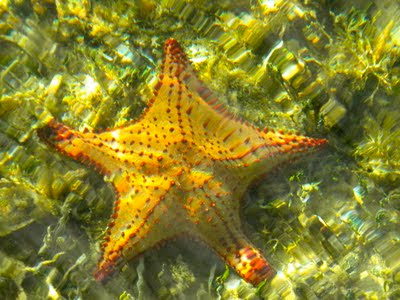 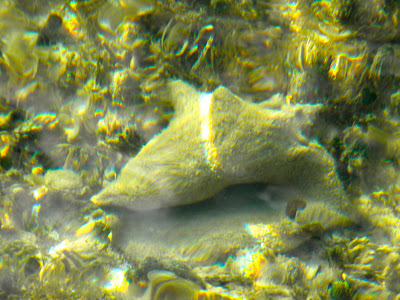 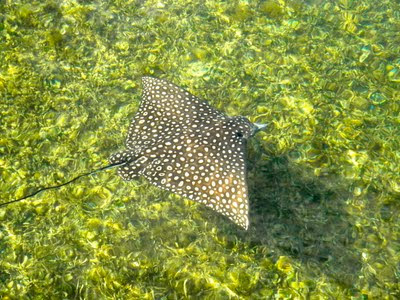 Spotted eagle ray....come on, you never see these this close to shore....but we did! 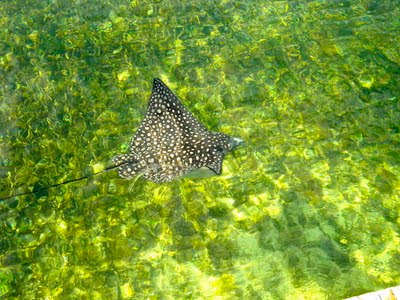 He was swimming up and down on the side of the dock. 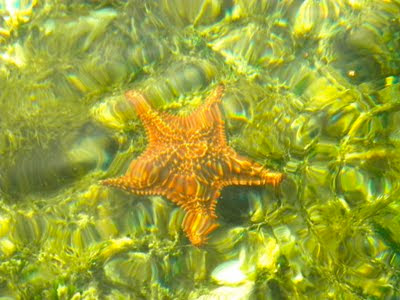 Ending this with another starfish!
I made the comment about diving because my son severely traumatized his right ear and traumatized his left ear when diving a few days ago.  Both ears were bleeding, *OUCH* and his right ear is really damaged.  They went to see the new ship that was dropped on the island, only about 50' deep if that, but the dive master kept going up to 30' down to 50' up to 20' down to 60'...he could not keep his ears pressurized, so when he came up, that's when they didn't clear properly.  He was in so much pain, (he looked like he did when he broke his wrist)...I took him to the clinic, (awesome, I do say) and they said that his right ear is very bad and his left ear was bleeding too, but that didn't hurt.  He still can't hear well out of his right ear but he will be able to fly home on Sunday.  The doctor put him on pain medicine and an anti-inflammatory to calm it down.
I'm sure he will be fine.
Well, have a great day my friends!
xxoo
Deborah
Posted by Deborah

WOW - what a most amazing and memorable holiday for good and not so good reasons!! That water spout is just phenomenal!! Amazing!!

And the turtles and star-fish and rays - WOW!! How lucky to be so close to these fantastic creatures!! The waters are so clean and clear too - yay!!

Oh but your poor son!! :-( Oh dear!! I hope he gets better and rests and takes extra special care!!

Grand Cayman is so beautiful!

Sorry about your poor son's ears. I can't even imagine what kind of pain he must be in. I hope he recovers soon.

That sure was a once in a lifetime find. So scary yet beautiful
Benny & Lily

I'm glad for the update on your son, but that instructor needs to be fired! He can hurt other people. Did you make a complaint? The waterspout pictures are incredible!! I would have run for cover and been too afraid to snap them!! Did you take the other pictures when you were diving? Or your son? Are they taken with an underwater camera? I LOVE the beautiful yellow starfish!

sorry to hear about he ear. hope it will be ok. i love that starfish, and the funnel is SCARY... the underwater photos came out super great.

Your photos are so beautiful - what an amazing trip. We sure hope your son's ears will be OK - mega OUCHIE!

What incredibly gorgeous pictures!
We hope your son's ear will be okay. OUCH!

NAK and The Residents of The Khottage said...

Wow! I'm amazed with the photos specially that big storm.


Cassy from How To Strum A Guitar

You pretty much said what i could not effectively communicate. +1

AWESOME pics! I hope your son is better....

That water spout was incredible! Great photos you got of it! Absolutely luved all the sea animal photos. Fabulous catch of that Spotted Eagle Ray! WOW! :D

beautiful photos!!!!! You had so much fun!
Woof, woof,

Nice shots of photos! I was really amazed! thanks for sharing :)

wow... what beautiful pictures. I hope your son feels better soon. How sad that he isn't 100% on vacation....

I went to that same Turtle Farm in Cayman Islands this past October! I thought the turtles could use some more space though!