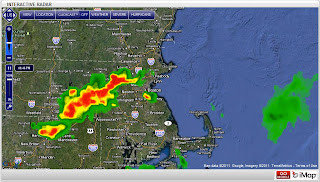 The other night, June 1st around 4:30  my daughter was turning the channel on TV when the news interrupted and said tornado warnings and that one had touched down.  Well this is huge news in New England, well for me anyways...from that moment on we were all glued to the TV.  The tornadoes caused a lot of horrible and tragic damage out in Western Ma and Central Ma where we live.  It was crazy.  I had all the kids, the pets in the basement three times while the super cells were going over head.  You have to understand, that just a few weeks ago I was saying we never get tornadoes and how lucky we are, well, guess what, we aren't that lucky.  My friends who live in Southbridge had serious damage, while another women, Stella, who is 89 didn't know there was a tornado warning and her whole house was damaged except for the living room where she was sitting.  She said her living room got very bright and the house started to shake and then she went outside to only find out that she just lived through a tornado!  How blessed is she?  My good friend in Southbridge takes care of her, that is how I know this.  My other friends still do not have power and they think maybe it will be back on come Sunday. Everyplace you go people are talking about it and apparently a funnel cloud touched down about 3 miles from my house because everyone is telling me about it.
The lightning strikes were abundant, again, I never saw anything like this.
Overall, we are safe and everything for us is back to normal. It was a stressful week and I am very glad it Friday.  I'll be visiting all my bloggy friends this weekend!  Time to catch up!

Have a great weekend my friends.
xxoo
Deborah
Posted by Deborah

glad you and your family are ok. I was so surprised to hear about the tornados in your area. We had warnings here in NJ but it might have rained for about 5 seconds - that was it.

Wow, we're glad everyone made it through okay! That elderly lady has an angel on her shoulder for sure!

We get tornado warnings here in southeastern Ontario, but so far I'm not aware of one actually forming or touching down near us. I hope it never happens, either. Ontario's tornado alley is in the western part of the province, around the Windsor area.

Have a good, storm-free weekend!

How scary! We have been getting tornado warnings all around the area, and we don't have them either. There was a news show on the other night about whether we are getting more of them in populated areas and big cities. So glad you are all safe and well.

Please be safe my friends.

So where in MA are you? Our Mom was born and raised in Springfield and lived there for 37 years. Many of her good friends have major damage to their homes and trees or have lost their homes due to the tornado. She lived in the East Forest Park area right near the Catholic high school that had all the damage. It must have been so scary for all. We had our scare here in Kansas a few weeks ago, but who thinks of tornadoes that bad hitting MA?

Glad you are safe.

Sure it was scary!
Glad to know you all are ok!
Take care
Kisses and hugs
Lorenza

Oh, glad you are safe. What a scary experience that must have been. We are keeping you in our thoughts and prayers.

Tornadoes are so frightening; glad you are all safe.

So scary! I've only ever been through one tornado. It did a lot of damage to trees and stuff but not to any houses in the neighborhood. I remember waking my mom up in the middle of the night and she didn't believe me when I told her about the tornado warning. She tried to tell me to go back to sleep. When I wouldn't, she finally turned on the news and found out I didn't just make it up.

I'm so glad you're all ok. I have a friend who just lost her house to a tornado in VA and I can't even begin to imagine what that must be like.

Love ya lots,
Maggie and Mitch

Oh my stars!!! How scary is that?!?!?! Me and Charlie are so so glad you and your family and your beautiful animals are safe!! Phew!! Hugs to brave wonderful Stella!! We hope the worst is over - please take extra care!! x

Sure glad you are OK! That sounds like a horrible experiance!

my friend who lives here, has her family living where your are, they were not hit, but no power for 3 days, so she took the dog and kids and went to boston to stay with the other grandparents until the power comes on. i was watching your area on TV and terrified for all of you. these are horrible storms and are going where they never went before. happy you are ok. amazing story about Stella

Deborah
I don't think anything has ever shocked me as much as hearing about the tornado in N.E. I don't know what is going on with this cruel life threatening weather the entire US is having.

My prayers and thoughts are with you and your family and friends.
God bless you all,
Madi and Mom

Yes so glad that you were ok. I know how scary the tornadoes are...We have had a few in GA...but do not remember them in your area before

Yikes! Those kind of storms are definitely not fun! Glad y'all made it through without mishap!

How scary! Even though I have lived in CO and now WI both well known for tornodoes, I still freak out when I hear the sirens. I am so glad to hear Stella is safe. It really is a miracle only her living room was standing, and so sad to hear about all the damage. Glad you are ok. Guess we all need to brush up on our tornado drills, you just never know.

OMG.. how scary.. I am so glad you are all ok. Stella was one lucky lady!

Glad you are ok!

Hi dear Friend,
I am so happy you and yours are OK and nothing or nobody was hurt!!! This has been strange weather the whole word is having!!
Thank you for your kind words to me about my lose. I am so lost without her at my side where she always was for 13 years and 3 months.
This is going to be so hard to get through!!!
Please do come again soon and check on me OK??
xx, Fern

paws crossed for you!! So scary
Benny & Lily