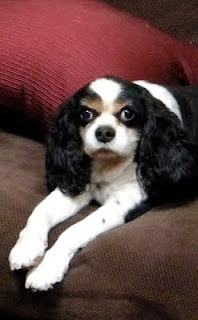 Hello Friends,
This morning, Winston went into heat distress.  He was panting and panting and I couldn't get him to stop.  He had some water and the water didn't stay down.  I thought he was chocking, but I saw nothing.  I immediately drove him to the Vet and they took right in and told me to come back later today.  He is still there now and I just received a phone call and received some very good news.  Even though they had to intubate him, his temperature shot up to over 106 and his throat was beginning to close.  After they got him to cool down and assisted his breathing, he is going to fine.  I'm going back later today to pick him up while Scooter has his physical.  They think he got over heated and he was only outside this morning for about 15-20 minutes at the most before 9AM.  I would have never have thought it was too hot at that time for him, but now I know.  They said that Winston must stay in the air condition and take it easy.  So, please send him the Paws of Prayer so that he will recovery fully.
xxoo
Deborah
Posted by Deborah

Purrs and purrayers for Winston! We hope he's home soon, back to a normal temperature and OKAY.

Wow, that is amazing that he would react that quickly. We don't get to stay out in the heat long either. Paws crossed for him to be OK. Is there any chance he got bit by a bug?

Beautiful Winston!!!! Me and Charlie are purring and praying for you!!! Awwwww you poor little doggie! Thank goodness you're ok now!! Take care
x

Wow...poor Winston! We hope he's feeling much better at this point in the day now! Scary to think that being outside for 15-20 minutes can overheat a dog! Riley is a Blue Heeler (like yours) and with her dark coat and double coat, she gets hot quickly. She always finds the shade in the yard...even on days that I don't think it's that hot outside. It's hard for us to judge the heat because we aren't wearing a fur coat!

Glad to hear he's going to be fine. I had heat exhaustion one time when I was a lifeguard and it was miserable, so I can sort of commiserate with Winston. I bet he'll be happy to get home!

oh deb, my heart hurts for you and for Winston, so glad he is ok, heat is a terrible things for dogs, especially here in Florida. Our Jake gets overheated really easy and needs AC. now you know and can protect him. Lord keep Winston safe and bring him home happy and sound Amen

The poor guy... and poor you... I know how scary it is... especially after last week... I am so thankful you got good news.. hang in there, you are both in my prayers

Oh gosh, who would have thought? Did you ask the vet what temp is too high to let him out? Poor thing!!!!! I'm so glad you took quick action, you saved his life!!

Our paws are crossed for Winston. We hope he's back to himself soon!

I'm glad to hear winston is alright! How weird that he had such a severe reaction to the heat, so quickly and so early in the day.

I'm glad you'll be able to protect him in the future.

My paws will be crossed for Winston until he is fully recovered!
This hot weather is so mean!
Take care
Kisses and hugs
Lorenza

deb, how is winston today?

Winston, you are in our thoughts and prayers! ~xxoo~
McGuffyAnn, Bill and Critters