Hello friends, it was going to be a nice quite night so I could get ready for my daughter's baby shower tomorrow and my mother called...When ever the conversation starts off with, Deborah, I have a problem....I know it's not going to be good. Gypsy, her little dog, she thought ate her hearing aid battery. So off to the Emergency Veterinary Clinic we go and lucky for us, they were not too busy. 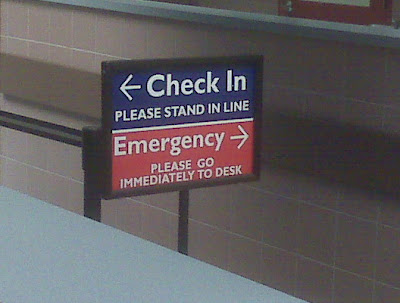 Here she is, Gypsy, acting as if nothing is wrong! The floor actually must have smelled real good the way she was sniffing everywhere! The Vet came out and took her to the back to take xrays and while we were waiting... 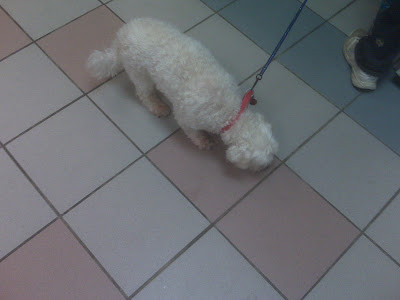 We saw this sign. Some good advise and I never thought to give the dogs these treats! I then took a picture to share it with you. Good news, no battery! Yeah!!! It was a good vet visit and my mother was thrilled. 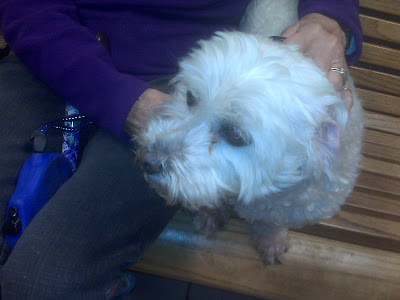 I then take them home and Bernie says, you want a head a lettuce! I say why and he says for taking Gypsy in and he said he bought two heads of lettuce! Of course I said no, but he insisted! Pretty funny and sweet in its own way!! (Isn't it said that two heads are better than one?) 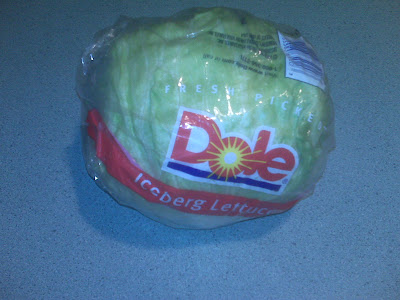 Have a great Sunday!

NAK and The Residents of The Khottage Now With KhattleDog! said...

What an exciting day - glad it was uneventful!

Hugz&Khysses,
Khyra
PeeEssWoo: Woo should have negotiated some tomatoes and bakhon!

Gosh, I'm so glad everything turned out all right! And that you had the presence of mind to bring along your camera! I'd say you have a good HEAD on your shoulders! Hope you have a great rest of the weekend with one major disaster avoided. BUT...where is the hearing aid battery?

I'm glad Gypsy was ok...I hope you have a wonderful time at your daughter's baby shower; congratulations, by the way!...Enjoy the day, Deborah!

first time fankful for no battery.

wif love from the Luke

Glad to know Gypsy is ok... without a battery inside!
I hope you are enjoying the rest of your weekend!
Kisses and hugs
Lorenza

miss deborah,
i sure am glad that miss gypsy didn't have a hearing aid battery in her tummy!!
*woof*
the booker man

Thank goodness that Gypsy didn't swallow the battery!
We love lettuce so we wouldn't have a problem helping you eat it!

I love lettuce and all those treats you can give doggies too! LOL!

Glad it all turned out uneventful.

Whew, glad there was no battery. And those two signs are wonderful ways to warn peeps about those hazards. We love our carrots and sometimes some green beans. We aren't so crazy about apples. Hope you can find some good veggies to go with that lettuce - Mom loves a good salad.

those little hearing aids are soooo small, I can just see them being snapped up mighty fast. I haven't eaten anything lately that's not supposed to enter my mouth. I do know about the 4 NO-NO's and tell everyone. Thanks for the reminder!!

Glad that everything was okay!

That treat list is really interesting - we're going to see if Clive will eat a carrot today (and maybe even Murray!)

Whew! When I read that Gypsy may have eaten a hearing aid battery, I held my breath for a moment thinking of all the bad possibilities. Such a relief that she didn't eat it. Did you ever find the battery?

I agree with Khyra and Sometimes Her Mom - you should've asked for bacon and tomatoes to go along with it!

According to my dogs, lettuce is a great treat :)

Then where's the battery?
Looks like it takes more than one head (of lettuce) to figure out.
Thanks for visiting my blog before, I didn't remember if I came to say hi to you.
Cheers!