Dear Friends, I just received an email from my friend Doris over at Crocheting in Georgia about her beautiful cat, Middi. Middi went to Rainbow Bridge last night unexpectedly. 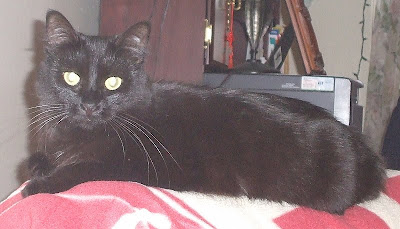 Her name was Middi because she was all black, like midnight! Doris found her half-starved about two years ago on her doorstep. Middi was determined to live because not only was she half-starved she was bony and had a terrible respiratory infection. Doris thinks she must have been dumped at her doorstep with the people knowing that Doris would help. Doris did help, even though Gizzy (Doris's dog that you know) didn't warm up to Middi, Doris still took Middi to the vet and had her checked and immunized, treated and spayed. She was a very good pet to Doris and was an indoor and outdoor cat. 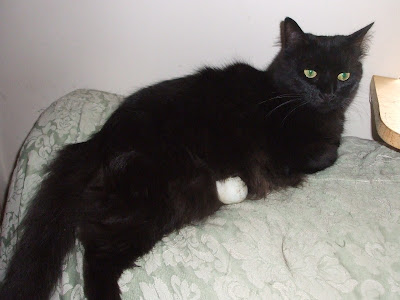 Middi had slipped out the door a couple of times this past week and remained outside. There is a feeding station outside for cats, with water and food. Doris thinks that a stray dog must have attacked her and it was Middi's time to go to Rainbow Bridge. 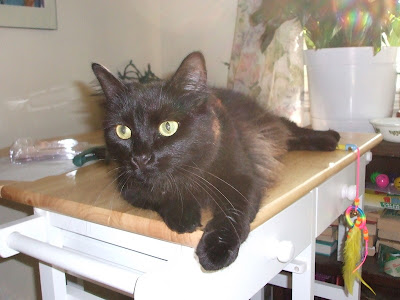 Doris is very sad about her loss, even though she knows Middi is at peace now and Doris only wishes she could have given Middi a better life, but reading this, Middi had a great life with Doris. Doris took her in and cared for her.
Middi was only three years old and Doris had her for two years.
If you have time, please go over to Doris's blog to at least say hi.
Thank you again,
xxoo
Deborah
Posted by Deborah

Thank you very much, Deborah, for posting this about Middi. She was a very good cat and deserved better, but we can not always determine how things will end...I will miss her very much!
(I can almost not bear getting attached to yet another cat the way they have been disappearing with those big hunting dogs roaming this neighborhood at night!)

Middi sounded like a very good cat. Middi was very lucky to have a mom like Doris to take her in and adopt her. More people in the world should take in sick animals like that to give them a better life. Over in rainbow bridge she is telling all of the other animals about how great she had it the past two years. Im sorry for your loss Doris.
XoXo

That is so sad. What a wonderful person Doris is to have given Middi such a loving home and a good two years.

I am so sorry to hear about Middi going on to the bridge. I hope that Doris is doing OK and is able to remember the great life that she gave to Middi.

I am so sorry to know about Middi.
Our thoughts and prayers are with Doris.
Take care
Kisses and hugs
Lorenza

Praying for mitti! It is soooo hard. I am facing it with macy, anytime.
Hugs,
andrea

oh, miss deborah, this news makes me full of the sadness. i'll go visit miss doris and let her know that we are thinkin' of her right now. thanks for letting us know.
*woof*
the booker man

That's so sad, Middi was a beautiful cat! I will pop over and give Doris my condolences.

Middi was beautiful, such a shame to lose her too soon...Condolances to Doris at this sad time.

We feel so sad for Doris. Middi was a beautiful kitty and a lucky kitty!

I'm so sorry for her loss... we'll stop by and purr for her.

Hi
I went to Doris's blog to leave my sympathies. How very sad. Thanks for the info about the lovely Middi.

Thank you everyone for your kindness. I appreciate your thoughts and words...I wish I could have kept Middi safe, knowing about those roaming dogs that killed some of our strays before, but she wanted out and it was difficult to hear her cry and be unhappy all the time...apparently she was and always wanted to be more outdoors than in.
Thanks again and it's so wonderful to know there are so many animal lovers in this world. It fills me with joy!
Bless you and your pets!

I will pop over later today and have a little chat with Doris. If it wasn't for her, Middi would have had an awful life.

So sad. I will stop by and see Doris, too.